This fact sheet is about the critical periods of development and types of birth defects that can result from exposures at different stages of pregnancy. This information should not take the place of medical care and advice from your healthcare provider.

What are critical periods of development?

In pregnancy, each part of the baby’s body forms at a specific time. During these times, the body can be very sensitive to damage caused by some medications, alcohol, or other harmful exposures. This specific time is called the “critical period of development” for that body part.

Does the chance for different types of birth defects change throughout pregnancy?

Every pregnancy starts out with a 3-5% chance of having a birth defect. This is called the background risk. If an exposure can increase the chance for birth defects, the chance depends on what body part is developing at the time of exposure. Once a body part has formed, it is no longer at risk to develop major birth defects. Some exposures could still affect a body part’s growth and/or function.

The chart in this fact sheet shows the critical periods of development for different parts of the body. The chart starts from the time of conception when the egg and sperm join. The weeks listed on the chart are the “embryonic age” or “fetal age” of a pregnancy. Note that this is different from a common way of dating a pregnancy called “gestational age.” Gestational age begins with the first day of a person’s last menstrual period. This day is usually about two weeks before a baby is conceived. This means that you can change gestational age to embryonic/fetal age by subtracting two weeks. For example, 12 gestational weeks (since the first day of your last period) is the same as 10 fetal weeks (since the first day of conception).

The solid bars on the chart show when each part is most sensitive to harmful exposures and at risk for major birth defects. Birth defects are typically classified as “major” if they cause significant medical problems and need surgery or other treatment. Heart defects, spina bifida, and clubfeet are examples of major birth defects.

Both major and minor birth defects are physical or structural changes. However, “functional defects” change how a part of the body works without changing its physical structure. Intellectual disability and hearing loss are both examples of functional defects.

The chart also shows the location of the most common birth defects that can occur during each week. In general, major defects of the body and internal organs are more likely to occur between 3 to 12 embryo / fetal weeks. This is the same as 5 to 14 gestational weeks (weeks since the first day of your last period). This is also referred to as the first trimester. Minor defects and functional defects including those affecting the brain are also able to occur later in pregnancy. 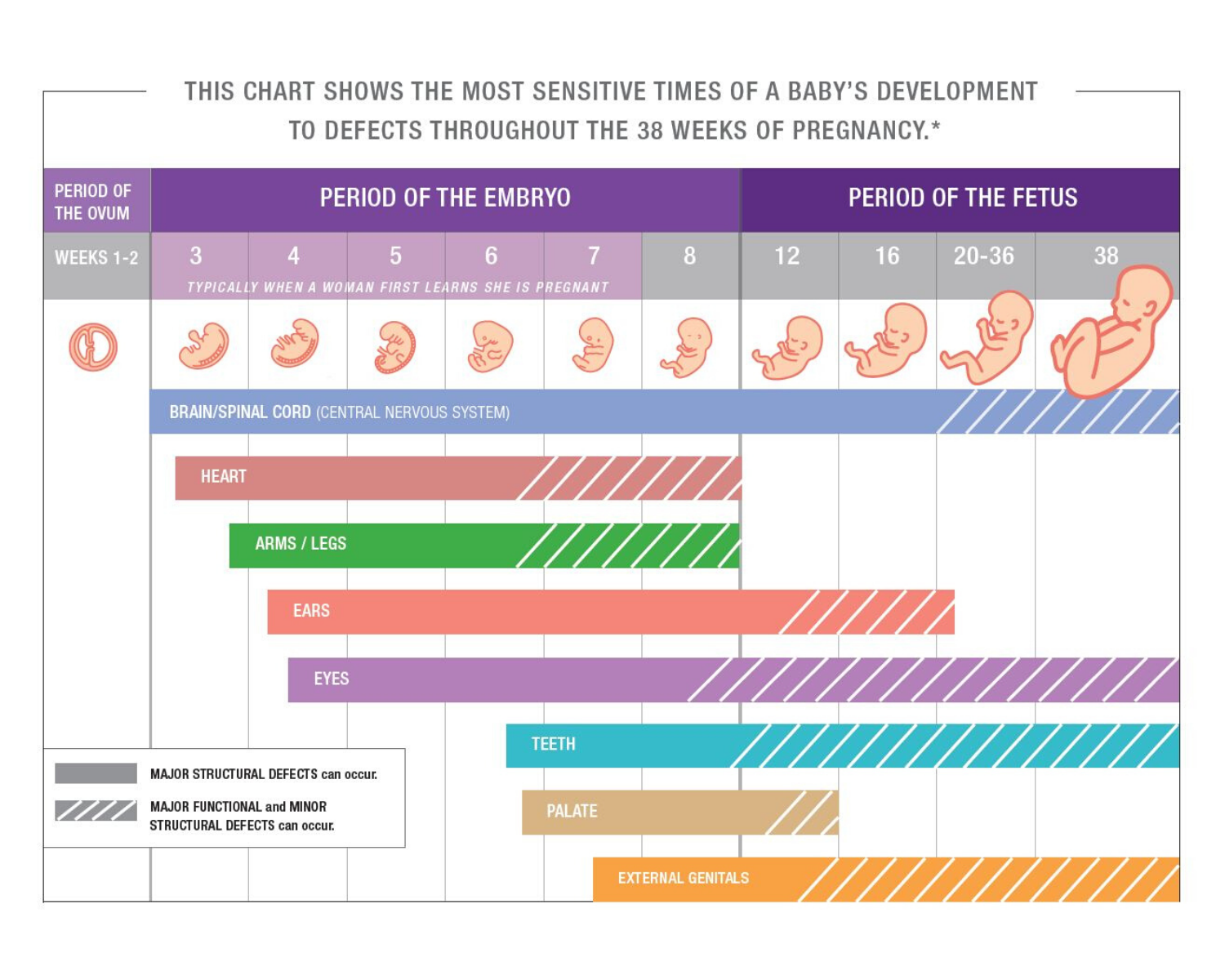 *Adapted from Moore 1993, and the National Organization of Fetal Alcohol Syndrome (NOFAS) 2009.

What is the greatest risk from a harmful exposure during very early pregnancy?

The first four weeks of gestation are called the “all or none period.” “All” refers to high exposures damaging all of the embryo’s cells. This damage can cause early miscarriage. “None” refers to exposures that are not high enough to have a significant effect on the pregnancy. The rule of the “all or none period” can be used to determine the chance of many different types of exposures. However, there are some important exceptions to this rule. Please contact MotherToBaby to discuss your specific exposure with our experts.

What are the greatest risks from harmful exposures during the first trimester of pregnancy?

What are the greatest risks from harmful exposures during the second and third trimesters of pregnancy?

Harmful exposures during the second and third trimesters can cause growth problems and minor birth defects. Growth is an important part of the second and third trimester. The structures and organs that developed during the first trimester grow larger. Babies with growth problems may be much smaller or much larger than average. This size difference can put babies at risk for certain health problems.

Harmful exposures during the second and third trimesters can also cause functional defects like learning problems. The brain is part of the central nervous system and it develops during the entire pregnancy. Major, structural brain development lasts until about 16 fetal weeks (18 gestational weeks). However, the brain continues to develop for the rest of the pregnancy, after birth and through young adulthood.

While usually less well studied, some exposures in the second or third trimester might cause other pregnancy complications, such as preterm delivery (delivery before 37 weeks gestation) or low levels of amniotic fluid (the fluid that surrounds the developing baby in the uterus).

The use of certain medications and substances at the end of pregnancy can cause withdrawal in some newborns. You should always tell your healthcare provider about all of the medications, supplements and/or other substances that you take.

Does this mean that an exposure might be harmful at certain times during pregnancy but not at other times?

Yes. Imagine your healthcare provider gives you a new medication to take during your third trimester. We will call this “Medication A.” You read that Medication A increases the chance for heart defects. This means that babies may have a higher chance for major heart defects if they are exposed to this medication during the heart’s critical period of development. The heart’s critical period of development is from 3 to 6 embryonic weeks (5 to 8 gestational weeks). This means that using this medication in the third trimester cannot cause a major heart defect. Always talk to your healthcare provider before making any changes to how you take your medication.